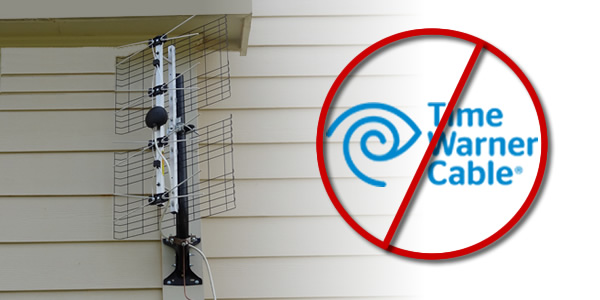 So I was evaluating my family’s TV consumption the other day and realized that we only watch a small subset of the premium channels we receive from our cable company (which happens to be Time Warner Cable (TWC)). I probably would not have noticed this luxury expense but the monthly price had steadily increased every year despite my not changing a thing to my subscription. In the past 5 years alone our cable bill has increased 32.3%.

My current basic cable bill is $90/month ($1,104/year). Now this is not an incredibly exorbitant amount, but it does add up, which forced me to ask some questions like:

Upon reflecting on this I realized that we rarely have time for TV these days. The majority of what we do watch is on the major networks (ABC, CBS, NBC and FOX) who incidentally are giving it away for free via OTA (Over the Air) broadcasts. When we want to watch a movie we rent it via Netflix.

With services such as Hulu, Playon, Roku, Google TV, Netflix, Amazon Instant Video and my existing TiVO Series 3 DVR and Playstation 3 (Which is capable of receiving a variety of internet streams) I am confident that I can cobble a solution together.

This is important because I have a high end home theater and would hate to cancel my cable service and render my system useless or less than optimal. I love to run everything full-tilt-boogey so digital surround sound and high definition video is extremely important to me.

Armed with the above information I was able to put together a set of basic requirements and create a personal challenge.

Challenge: Replace my cable company with a low cost alternative that delivers the same level of quality and programming.

When I was a kid living in New York City you could harvest television signals by connecting a set of rabbit ear antenna’s to your TV. The signals broadcast by the major networks were free for the taking and television shows were subsidized by commercials. Fast forward to 2011 and nothing has really changed except our mindset. We now have TV’s capable of receiving hundreds of channels which we typically receive through cable or satellite providers.

Growing up, cable was a luxury that only your “rich” friends had. Today, cable is perceived as a basic utility like electricity or water. It’s so prevalent that people tend to forget, or worse yet, don’t even realize that cable or satellite is not required to receive television broadcasts. In fact, over the air High Definition broadcasts are actually of better quality then what your cable company provides because they are transmitted uncompressed. No joke!

What You Need To Install a HDTV Antenna

WARNING: Installing a HDTV antenna is not rocket science, however improper installation can result in damaged home entertainment equipment, injury or death. As a result, it is highly recommended that you get a licensed and insured professional installer to perform the work.

How to get Free HDTV?

Before you run out and buy an antenna you have to determine where the transmission towers are. Unlike cable or satellite service which grab and combine signals from their various sources and then feeds them to your house through a single cable line, harvesting OTA signals with an antenna requires that you locate the various transmission towers available to you, purchase an appropriate sized antenna and mount it in the most advantageous direction.

This might sound complicated but the internet makes determining all this quite simple. A quick stop at Antenna Web reveals everything you need to know about where transmission towers are located in your neighborhood.

Plugging my address into Antenna Web reveals a host of information: 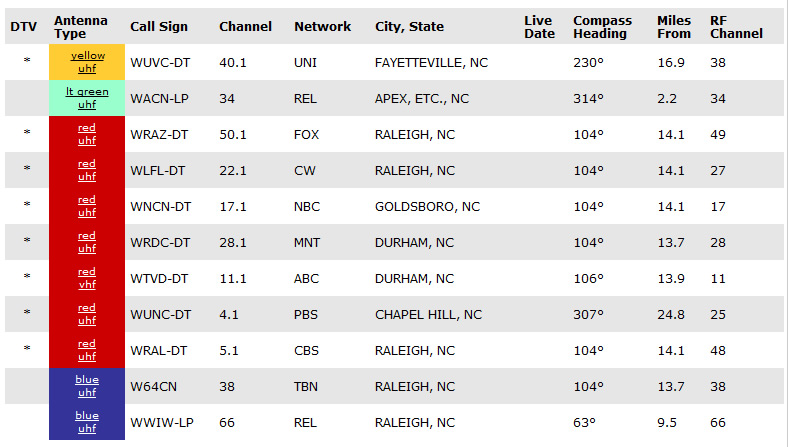 A Street Level Map View is also provided so you can more easily see where each tower is located and what channels are broadcast from each.

From here I can see that the channels I am most interested in are broadcast from Tower B (CBS, ABC, NBC, & FOX as well as a few others) suggesting that it would be wisest if I point my antenna in that direction to maximize reception. 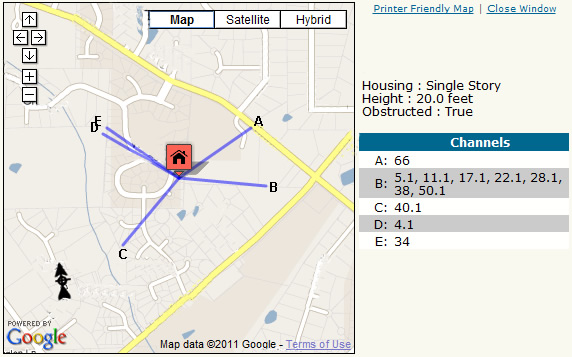 Looking at both charts I can see that a properly mounted red antenna will allow me to receive all yellow, green, and red stations. If I also wanted to get channel 66 and 38 in addition to the ones further up on the list, I would have to purchase a blue antenna.

NOTE: Antenna colors that appear lower in the table have more RF gathering power and allow you to receive transmissions from towers located at further distances.

Antenna Web’s recommendation of a red antenna means that I should be looking for a medium directional antenna. A directional antenna can typically “see farther” but with a narrower scope of vision (like a flashlight). Meaning if you wanted to receive a signal from one specific tower way off in the distance, a directional antenna would be your best bet. The down side to this type of antenna is that its ability to see other towers located in other directions is zero. So you get one tower really good and the rest, not at all.

Since I am all about maximizing the number of channels I receive, I took Anntena Webs advice as a “suggestion” and purchased the DB4 Multi-Directional HDTV Antenna from Antennas Direct instead. The reason why I chose this antenna over the recommended directional antenna is because there are other towers around me that I would also like to receive, none of which are greater than 43.5 miles from my home. Since the DB4 Multi-Directional HDTV Antenna is rated at 55 miles and is so highly reviewed on Amazon, I thought it would be the best choice for me.

Assembling and mounting the DB4 Multi-Directional Antenna is pretty straight forward. A supplied U-bolt secures the antenna to the mast (sold separately) and a simple coaxial connection allows you to bring the harvested OTA signals down to your grounding block. 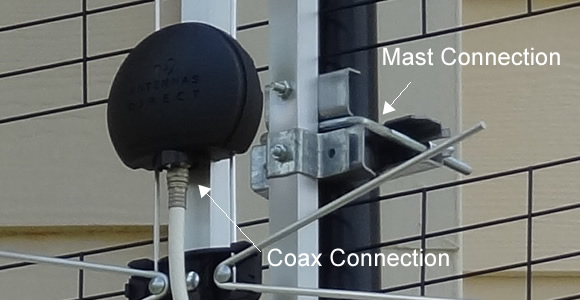 To avoid damaging your home electronics grounding is essential. In fact, this is the most important and dangerous step in the process. Failure to properly ground your antenna can result in damage to your equipment from a lightning strike or from atmospheric static that generates as air passes accross your antenna.

I grounded mine in two locations, on the mast, and through the coaxial via a grounding block. This is where things can get dicey so it is best to have a professional do the install for you. You really can get yourself killed if you make a mistake here. 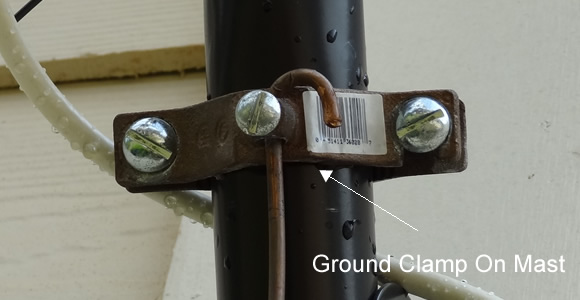 The first connection (pictured above) is to a grounding clamp. I got a copper one from home depot. 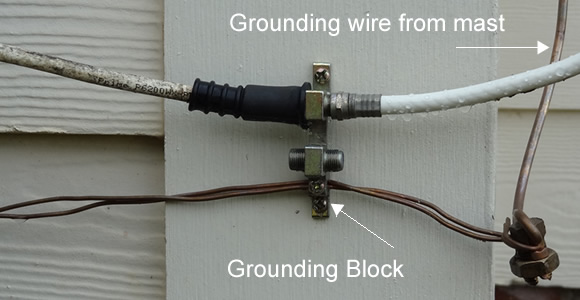 The grounding wire is then pulled down and threaded through a grounding block. This should be done with a single piece of solid copper wire. Because the wire (gauge) was too thick (6 gauge) I could not fit it through the small hole in the grounding block so I temporarily rigged it by attaching a smaller gauge copper wire (10 gauge) which I subsequently doubled-up to improve its chances of survival in the event of a lightning strike. Again, this is a temporary fix.

The grounding block is also where you connect your coaxial cable coming down from the antenna to the coaxial line going into your house. 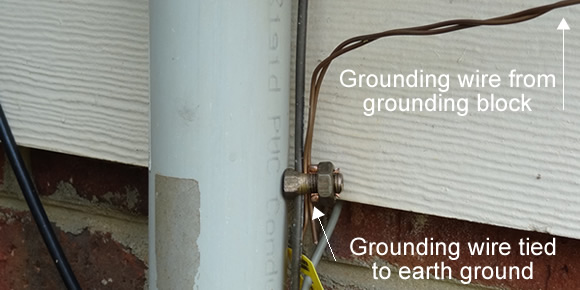 Once everything is connected you have to perform a channel sweep from your television tuner to zero-in on the new channels. This usually entails switching the television’s input source mode from cable to antenna. Not a big deal, but worth noting.

I probably wouldn’t have believed you had you told me this but OTA signals received via an antenna provide a noticeably better picture then the ones provided by the cable company. Alright, I would have believed you, but I wouldn’t have thought it made much of a difference. Having switched, I can honestly say that not only is the image quality improved, it is quite breathtaking.

My cable company provided a decent signal so I didn’t think it could get better but I was wrong. The difference between a compressed cable signal and uncompressed OTA signal is shockingly noticeable.

It’s worth noting that if you are switching from cable that inclement weather can and will effect your picture quality. This is typical of any antenna gathering solution. Even satellite dish performance suffers when the weather is bad.

I’ve had my antenna system running for a little over two months now and despite this one drawback, I am very happy with this free alternative.

So did I meet my objective?

Replace my cable company with a low cost alternative that delivers the same level of quality and programming.

Let’s see. I certainly did replace them, and the channels I do get are of better quality so in that regard I exceeded my goal.

Is it low cost?

Hell yeah! For $113.05 I was able to eliminate my ever increasing $90/month cable service bill.

Did I get all the channel programming I want?

Pretty much. I wanted the major networks and I got them. For premium content we are currently using Netflix to fill the gap. We were already subscribers so there was no added cost.

I also recently subscribed to HuluPlus and Playon. The jury is still out on whether these add value but at $7.99/month and $4.99/month respectively I can play with these services and still be way under budget.