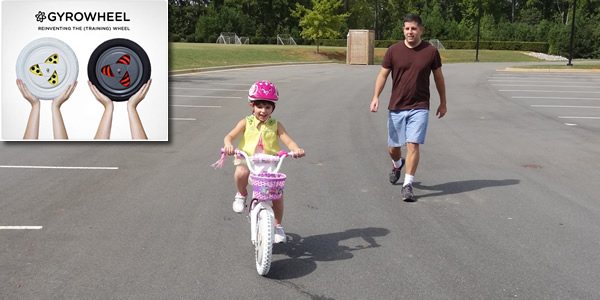 This weekend, I taught my daughter how to ride her bike. We tried training wheels, but in the end I turned to technology (the Gyrowheel) to help us get the job done. My only regret is that I didn’t buy this cool piece of tech sooner.

As a father, one of the most gratifying moments in life is helping your child learn a new skill. Putting in the time and effort and then seeing the light bulb go off as your child gets it is an indescribably amazing feeling. Watching my daughter pedal along on two wheels this weekend conjured one of life’s most rare and precious feelings that would become an indelible fixture in my memory.

My wife and I upgraded my daughter’s tricycle to a bicycle when she turned four. This month she turns six and still couldn’t ride it without training wheels so I figured I had to step-up my game.

How I Learned To Ride A Bike

I learned to ride a bike when I was 10 years old. Growing up in New York City there weren’t many bike riding opportunities. So on the few occasions I had to get outside with my bike, I learned via trial and error. And by error I mean nasty collisions with light poles and parked cars. This usually resulted in scrapes and bruises, skinned knees and jacked-up palms.

Teaching My Daughter How To Ride

Reflecting on my own experiences learning to ride a bike made me realize everything I didn’t want for my daughter. She’s sugar and spice and everything nice after all. I don’t want her traumatized by the experience. Injury, though inevitable, could potentially set her back and shatter her confidence before she has mastered the skill. Making it more difficult for her to saddle-up and try again.

I don’t recall riding a bike with training wheels ever, but they come with kids bikes so I assumed they must be there to help kids learn to ride a bike. Boy was I wrong.

When she got the bike a couple of years ago we would let her ride the bike with the training wheels aligned level with the back tire. We weren’t focusing on getting her to learn how to ride on two wheels at the time. It was more so that she could immediately enjoy the independence of riding her big girl bike.

This provided her with the stability she needed but was obvious from the way she was angled that she was not learning anything with regard to how her body needed to be oriented to ride without training wheels.

So as an Engineer I looked at the problem and noted the following:

I also noticed that when my daughter was riding her bike without the training wheels she would over-correct with the handlebars as her brain processed the imbalance and tried to make quick and dramatic corrections. This was with me providing as much assistance as I could by holding her under the arms.

What I needed was something that would allow her to ride on two wheels and provide some support. A bike that didn’t want to tip over so quickly so her brain could have time to process the imbalance and take the appropriate countermeasures.

Was there a technology that could do this? Surely someone must have invented an improvement to the training wheel. Then I found the Gyrowheel which is totally what I was looking for! 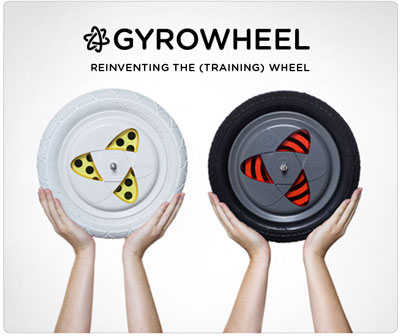 The gyrowheel is a tire that has a gyroscope at its core. One of the neat properties of gyroscopes is precession – the ability to counter a perpendicular force applied to its axis with an equal and opposite force on the opposing axis. In short: They don’t like to be tipped over.

See this video I found on YouTube for a demonstration of this in action.

After doing a little more research I promptly ordered one of these things. The physics sounded plausible, but could the gyrowheel deliver on its promise? 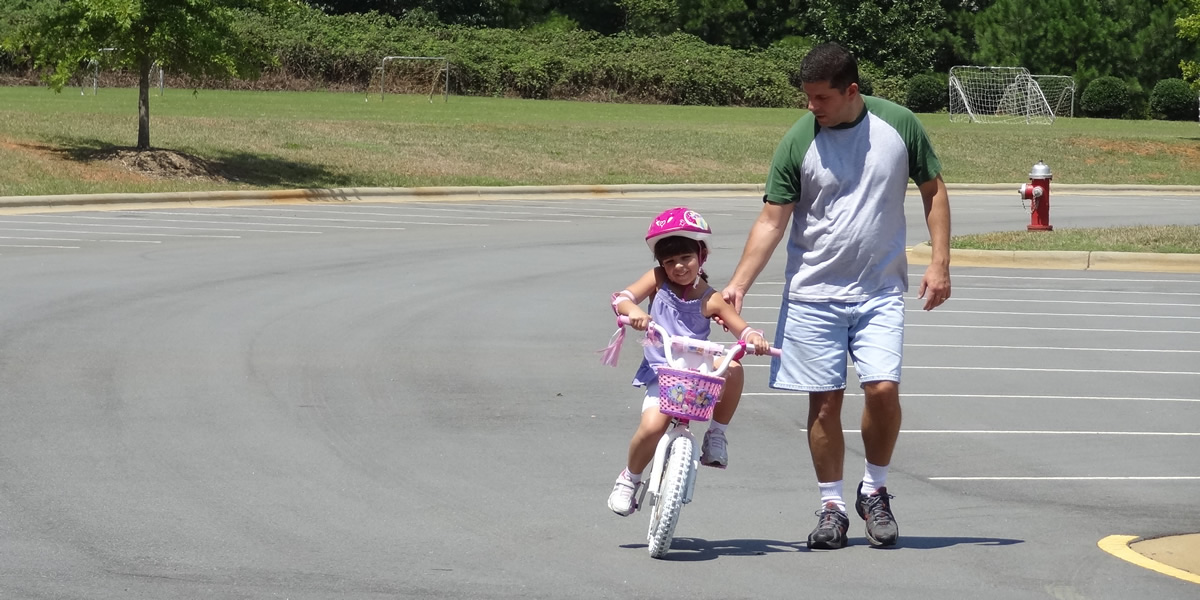 Following the manual I fired up the gyrowheel, supported my daughter under her arms, told her to look forward, pedal, and showered her with encouraging words as we went. As you can see from the picture I spent the whole session trying to get her to unlearn the bad habits she developed riding with training wheels.

Between cold weather conditions, rain, illnesses, and the start of school, it took us six weeks before we had another chance to play with the gyrowheel. Since it had been so long I had low expectations for this outing. My hope was that by the end of this session she would have had a couple of moments where she was riding unassisted for a few seconds so she could experience the feeling of two-wheeled balance.

I also tried to change my grip. This time, instead of holding her under the arms as I did previously (where she flopped around like Bernie Lowmax) I held her waist so that I could try to position her hips where they needed to be.

Quite unexpectedly she was riding her bike on her own on the second attempt. Literally within 2 minutes of her trying.

Holding her hips really helped her feel how much deviation she should expect to have. During her first few pedals she wanted her hips to swing wildly to the left and right (to catch her balance) but I pushed them back to center and then she felt it. The connection was made and she took off leaving me trailing behind. For the next 45 minutes she was pedaling madly on her own with me jogging behind her.

Two days later, on the heels of our previous success, we took her out again to see if her new found balance stuck. Once again, I held her by the hips and she took off on her first run and never stopped. For the next 45 minutes we practiced riding, stopping, and starting the bike.

As cool as the whole thing sounds in theory, seeing it unfold in action is quite compelling. My wife was kind enough to record our journey and I edited the three sessions together in this short 2 minute video. Watching it like this allowed me to see the major leaps in both ability and confidence (both mine and my daughter’s) that occurred in such a short time.

The gyrowheel has three stability settings (high, medium, and low). The idea is to start at high, then work your way down to low before disabling it. Interestingly enough I inadvertently set the thing to low on Day 2. That’s the day she nailed it. So the only thing left to do is disable it. In fact, I tried that on day 3 but she wasn’t ready so I am going to have her continue to practice on low until she is very comfortable riding.